Horse’s back: how does it work? 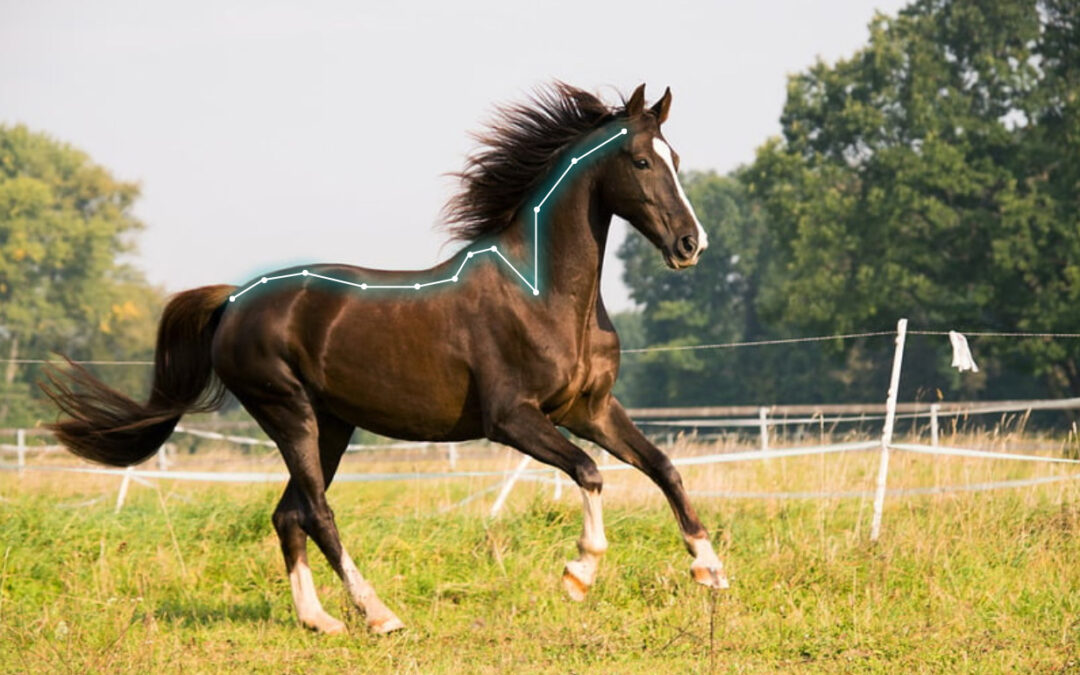 Home 9 Locomotion 9 Horse’s back: how does it work?

The horse’s back is a key element of equine biomechanics, linking the hindquarters to the forehand, and supporting the rider’s weight. The different anatomical structures and muscle chains that compose the horse’s back provide flexibility and propulsion.

In daily training, the exercises must be varied and adapted to many factors: age, level, specific pathologies, morphology… in order to build a balanced musculature that allows good mobility.

But how does the horse’s back work at different gaits? And which exercises impact its musculature?

1. Biomechanics in movement
2. Horse work and back musculation

The different anatomical structures of the back respond differently depending on the gait the horse is working at. But how does the back work in each of the three gaits?

The walk is the gait that combines the most complex movements at the vertebral level, most of which are non-existent in other gaits. These movements are longitudinal and axially rotated. The amplitude of the vertical movement is the greatest compared to the longitudinal and transversal movement. But there is also a significant rotational movement along the transverse axis. It is especially at walking that flexion/extension, lateroflexion and rotation of the thoracolumbar vertebrae can be observed (Denoix J.-M. and Audigié F. 2013).

This gait involves the deep juxta-vertebral muscles: walking exercises are therefore excellent proprioceptive work, allowing the deep muscles to be worked and developed in order to help prevent pathologies.

Trotting produces passive flexion-extension movements due to the inertia of the intestine mass and the tonus of the back and abdominal wall superficial muscles. When a horse is trotting, thoracic extension occurs at the midpoint of support, then in the thoracolumbar region, and at the end of support, it is maximal in the lumbosacral area. During the suspension, flexion occurs in the same order, ending with maximum lumbosacral flexion when the hindlimb is engaged. Diagonal limb advancement causes lateroflexion on the side of the forelimb at rest, rotation on the side of the forelimb, and rotation of the sacrum due to the hindlimb (Denoix J.-M. and Audigié F. 2013).

The canter, unlike the trotting gait, involves the back muscles, which cause the flexion-extension movements of the torso, alternating the contraction of the extensor and flexor muscles. As for the walk, the rotational movements are also important. During the hindlimb propulsion, there is a movement of the neck that lowers the muscles of the common mass (erector spinae). All these movements allow the extension of the spine. The vertebrae can be compressed and the supraspinous ligament can be stretched. This stiffens the whole spine and allows maximum use of the hindlimb propulsion. During the swing phase, there is a rise in the neck with a relaxation of the supraspinous ligament which facilitates thoracolumbar flexion, and also lumbosacral flexion which allows engagement of the hindlimb (Denoix J.-M. et Audigié F. 2013).

The canter is the horse’s more natural gait. The amplitude of the longitudinal movements is greater than in other gaits, so the movements of the back carry the visceral mass, whereas, at the trot, the back is subject to the movements of the intestines. Consequently, the trot is not the most suitable gait for working horses with back pathology. To protect the horse’s back, it is a good practice to start with a 20-minute walk and then a canter before starting trotting.

Horse work and back musculation

The majority of the horse’s musculature is located in the neck and torso. The horse has very long tendons, and has almost no muscle in the limbs: they are fine and very reduced muscle bodies. In the daily training of the horse, it is therefore important to focus on the muscular masses of the neck, the torso and the upper limbs – shoulder and hip. The rider/trainer has little effect on the distal extremities, especially the hindquarters, because of “reflex” movements: the horse cannot flex a stifle without flexing the hock and fetlock.

Horses are quadrupeds, and without sheathing of the ventral line, the back cannot be functional, so abdominal line strengthening is essential: no abdominal muscles, no back! Early on, especially in young horses, exercise can be done by stimulating the work of their abdominal muscles in order to start to have a natural withers rise and sheath before building up the muscles.

The biomechanics of the horse in motion is a complex subject. The analysis of the anatomical structures of the different gaits allows us to evaluate the quality of the movement, and thus the health of the horse at work.

As far as the back is concerned, it is essential to remember that the stability of the ventral chain is essential for the harmonious functioning of the dorsal chain – “No abs, no back”. In order to build up the strength of the abdominal chain, a number of exercises can be carried out, whether ridden, in hand or at lunge.

No comments to show.